Something a Little Fresh

This week was a challenge for me.  Almost immediately I my idea; I was going to photograph of Fresh Water.  Thinking rivers and lakes since I teach all about their properties in Earth Science, this idea was fresh in my mind.  Unfortunately someone beat me to the punch and shot photos of water.

Then to the fish stalls on Granville Island.  Had all the intensions in the world to head there on my day off during the week.  Well, apparently I wanted to be lazy and never made it out of the house that day.

Onto the next idea; a freshly brewed cup of coffee, my morning ritual.  Only I was going to add a twist of including an actual coffee plant and freshly ground espresso beans.  I’ve been keeping my eyes open for coffee plants in the local garden stores for months now, only I still haven’t been able to find one.  I look at a coffee plant every morning before work, as I await my Grande – Triple Shot – ½ Sweet – Non-Fat – No-Whip – No-Foam – Mocha at Starbucks.  I thought about asking if I could borrow their plant but never got around to it.

Fourth idea; freshly cut oranges slightly squeezed so it would look extra juicy.  Only by the time I got around to photographing the oranges were all gone.  And by this point there were photos of lemons, limes, and oranges that had been posted.

Lost count yet?  Fresh baking, I was going to bake my favorite oatmeal muffins and have a nice perfectly square piece of butter melting on it.  Then I thought to myself, "then I'd have to eat them."  And this wouldn't fit into my attempts at getting back into healthier eating after a couple of weeks of over indulgence.  Ah well...maybe in a months time for a special treat.  (My muffins are extra fattening with the amount of butter I use).

I was stuck; I knew I’d find something eventually that I wanted to attempt to photograph.  Ah… “fresh” threads?  The new t-shirt and hat I had designed and made for my brother’s upcoming cycling trip.  Although, the term “fresh threads” didn’t quite have the right ring.  Maybe “new threads”; but not fresh threads.

In the back of my mind I had the idea of a “fresh perspective” and was going to take a photograph from a new perspective.  A perspective you normally wouldn’t encounter.

But that’s okay…Sunday night I saw it…it was calling to me.  A pomegranate.  It’s a fruit and fruit are fresh.  And there it was!  I knew I wanted it to have a strong contrast to bring out the red, so after being cut and half of it seeded it went on display on a white plate.  And a white backdrop was added too; okay it was a piece of paper that I had taped onto the backsplash of the kitchen counter. *I couldn’t get any of the preset White Balances to bring out the correct colors, so I used a gray card to create a Custom White Balance.  Due to the slower shutter speed I had to use a tripod too. 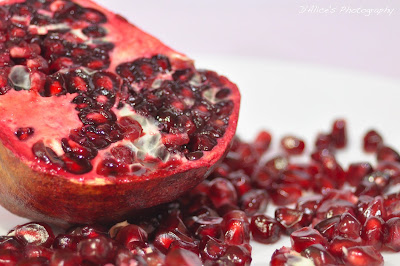 I’m quite happy with the results.  As always I welcome any thoughtful critiques.